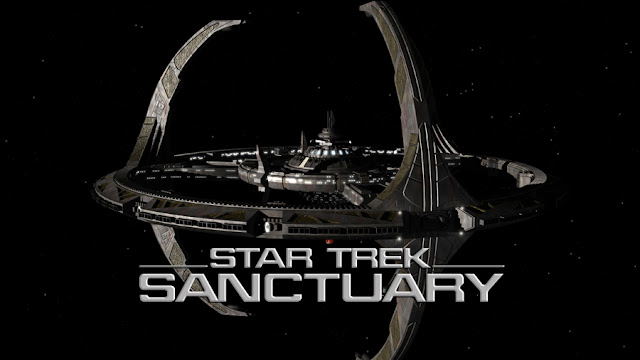 Star Trek: Sanctuary is a post-Dominion War series set on Empok Nor, renamed Sanctuary, which served as home base for Starfleet's newly formed 11th Fleet in the year 2376.
=/\=
Crew Manifest
=/\=
February
"Peace Offering" A brief conversation between Admiral Tattok and Captain Synnove Natale about the upcoming mission in Cardassian space. (vignette, G, January 2011)
March
"Sanctuary" Captain Natale and some of her crew arrive at Empok Nor... though not long after, some neighbors come calling. (short story, G, January 2011)
"Frenemies" Sanctuary's first "staff meeting" is rife with tension. (vignette, G, January 2011)
"The First Volley" Natale and Kirek square off for the first time... but definitely not the last. (vignette, G, January 2011)
April
"Frustration" Natale records a few logs detailing some of the troubles she's faced as Sanctuary's commander. (vignette, G, February 2011)
"Encounters" A stopover on Sanctuary begins with two interesting meetings for Trident's Rogan Enek. (vignette, G, February 2011)
May
"Connections" A lesson is learned by a young ensign while Rogan and Kelley each share a truth about themselves. (vignette, G, February 2011)
June
"From the Shadows" Admiral Tattok's arrival at Sanctuary is accompanied by an attempt on his life and betrayal by a long-time friend. (short story, PG, March 2011)
"Addition, Subtraction, and Sabotage - Part One" Natale imparts some information to the crew that doesn't go over well. (vignette, G, April 2011)
"Choice and Consequence" Roijiana confronts Zram about his dislike of her, and the two have a heated argument. (vignette, G, April 2011)
"Wandering Thoughts" Jordan Kelley's mind is troubled as he contemplates his feelings regarding one of the crew... and Rogan Enek. (vignette, G, April 2011)
"Parting Sorrow" Jordan and Enek's parting is bittersweet. (vignette, G, April 2011)
"The Escape" A mysterious Maquis ally helps Rkasi Cen escape before he can be hauled away to prison. (short story, PG, May 2011)
"Interview with a Saboteur" SCIS officer Andon Vehl interviews sabotage suspects. (short story, G, June 2011)
"Addition, Subtraction, and Sabotage - Part Two" The saboteur is caught at last when he makes his biggest mistake—threatening harm to the only child of Eton Kirek. (short story, PG, June 2011)
"Expressing Concerns" Ambassador Sanbo arrives on Sanctuary, and Kirek voices some of his concerns about Starfleet—such as whether or not they will defend his people. (novelette, G, June 2011)
July
"Memorable Days" After a trip to a tactical seminar, a couple of surprises await Jordan Kelley upon his return to Sanctuary. (novelette, G, July 2011)
August
"Just Friends, Nothing More" Trouble on the Trident causes tension on Sanctuary—Captain Natale is forced to lay down the law to Eton Kirek and Jordan Kelley is forced to come to terms with his feelings for Trident's first officer. [Note: This story takes place during "The Trouble With Women".] (short story, G, July 2011)
"The Trouble With Women" Alok is sent on a rescue mission and finds himself in perhaps one of the most complicated positions of all: a man falling in love for the very first time. (novella, G, July 2011)
November
"The Aphrodaiquiri Crisis" A new attraction at Nigella's leads to a number of personal conflicts. (novelette, PG-13, August 2018)
"Stand By You" Captain Natale's friends rally around her, helping her and Captain Wallace knock down the last barrier between them. (short story, PG, August 2018)
December
"Beginning's End" A couple of surprises and a tough decision to make arise for Natale as the year starts coming to a close on Sanctuary. (novella, PG-13, October 2018)
=/\=