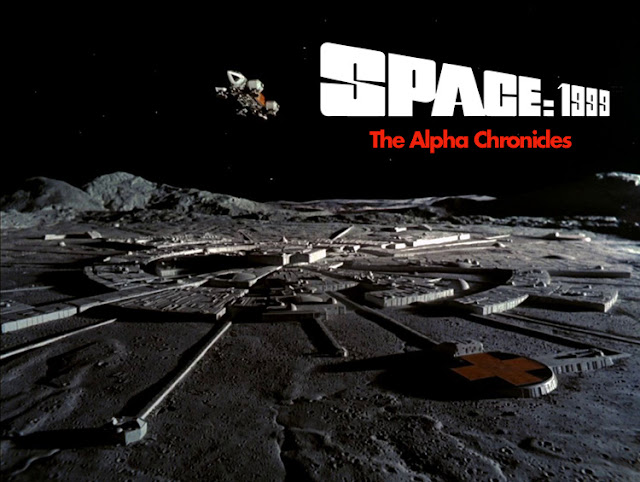 The Alpha Chronicles is a limited series of crossover stories between Star Trek and Space: 1999.
_____
_____
​Original Alpha Crew
Current Alpha Ground Crew
_____
"Moonbase Alpha" A scientific research facility and extra-terrestrial monitoring station located in the moon’s Plato crater. Construction was financed by the International Lunar Finance Commission and was begun on February 3, 1983; though briefly halted due to the breakout of war in 1987, building resumed shortly after the war’s end. Though operational and occupied for years, final completion of the Alpha construction project occurred in 1997. (Moonbase Alpha Wiki article)
"Breakaway" The huge amount of nuclear material stored at Nuclear Disposal Areas One and Two created fields of immeasurably intense magnetic radiation. Area One erupted into a subsurface firestorm due to the buildup and destroyed the entire facility, though eventually burned itself out. Professor Victor Bergman warned Alpha’s Commander, John Koenig, that Area Two would experience an even worse disaster if they could not get the waste containers spread out over a wider area. (Moonbase Alpha Wiki article)
2006/2378
September
"New Life, New Civilization - Part Two" After seven years drifting between the stars, a "space warp" deposited the moon into an alternate universe. Not long after being being informed they were in an alternate reality in the year 2378, one of the officers of a Federation starship reported that their flight path would lead them to collide with an inhabited planet.  (novelette, PG, April 2019)

"Coming Home" Two weeks after arriving in their new universe, an Eagle and three crew members Alpha had lost nearly five years before were discovered adrift in space. Messenger's Commander McMurty also determined how to rotate the moon in order to maintain a natural environment. (novelette, G, September 2019)

"The Purpose of Alpha" The investigation into the miraculous return of Victor, Paul, and Kano yields little result except the discovery that beings of great power are responsible -- and also left twelve encrypted data files on their Eagle’s flight recorder that would only open when they were needed. Plans for terraforming the crater and the rest of the moon move forward as well. (novelette, PG-13, October 2019)

September/October
"The Inconvenient Truth" The first stages of transformation of the Plato crater are set in motion. Alan Carter and Sanai Grayson name each other a friend after an incident in which the latter is not her usual self. The first day of atmosphere sees Messenger called away suddenly, and the Alphans are introduced to one of the many dangers of their new reality in the form of Orion slavers. (novelette, PG, February 2020)
October/November
"Relationships of a Romantic Nature" Two Alphan men and two Federation women consider their relationships, past and future, and the beginning of something wonderful opens up for all. (novelette, G, August 2020)
_____
The attack by the Orions led to the proposal of not only having at least one starship remain in the system indefinitely, but the construction of an orbital base as well, to provide better defense of the new colony as well as the nearby planet where a pre-industrial civilization lived. John Koenig agreed to this plan, but left the logistics to Starfleet so that he could focus on what was going on around the moon. His first major decision was to confirm a name for the moon, something that had been suggested by the captain of the Ajax. Suggestions were submitted by the Alpha crew, and a general consensus gave their home the name Alpha Luna.
A century-old Watchtower-class starbase that had been abandoned at the start of the Dominion War, due to the great need for personnel, was towed by warp sleds from its place in the Nimbus system and set into stationary orbit over the moonbase in the first month of 2379. Formerly designated Starbase 411, it was renamed Starbase Alpha, and an extensive overhaul of the station began. Everything from the hull plating to the weapons were upgraded, while some 350 crew quarters were actually removed to make way for the installation of additional manufacturing facilities and science labs. The purpose of the base was to not only provide defense of the colony and their neighbors, but also to assist the fleet in the manufacture and storage of replenishable supplies.
Starbase Alpha would be officially operational, ironically, on April 11, 2380 (4th month, 11th day of the year -- same as the old base number). Within months of going online, the crews of both the moonbase and the starbase began to refer to each other as "Alpha Ground" and "Alpha Sky", respectively. The crews also began a program of exchange, with Starfleet and Alpha crewmembers alike taking on the challenge of not only learning each other's unique technology, but working alongside one another in both locations. Thus a lasting partnership was formed between the two facilities -- as well as a friendly rivalry -- with many physical science studies being conducted on the moon and interstellar studies being conducted on the starbase.
=/\=