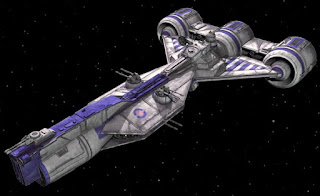 Auxiliary Craft
None standard – owner provided
The cargo bay is designed to handle one small craft, plus there is an external docking port on the engineering section.
4 Escape pods
Forward cargo pod can detach and serve as an emergency landing craft (one-time use).

These specifications were taken from Wookieepedia, were Trekified by Miranda Fave and The Lone Redshirt, and may not match other sources.