Here in the BtS universe, the Federation has not one but three separate military forces: the Border Patrol Service, the Marine Corps, and Starfleet. They are—respectively—the Coast Guard, Special Forces, and Navy of the future. They all wear the same duty uniform, but different colored shirts beneath. In regard to Starfleet, I've kept with the canon color scheme for the most part, though with a few notable additions. The Border Patrol and the Marines I've put each in their own color to make them more distinctive from Starfleet.

As the Border Patrol was once a sub-division of Starfleet, they wore the same
color scheme up through 2315, when they switched to a solid color.
Blue was selected as an homage to the service being structured on the model of the
United States Coast Guard (one of the USCG's official colors).

Formerly known as United Earth Military Assault Command Operations, or MACOs,
this division has long been designated by just one color. They see it as a symbol
of their unity and cohesiveness as a military organization. 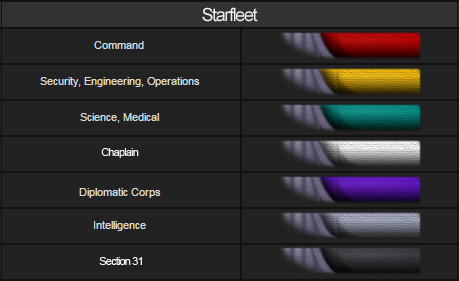 Starfleet, from its inception, elected to distinguish command, operations, and sciences
by color-coding them. It is only in the last half century that the Diplomatic Corps
and Intelligence were given a separate color code from that of Command.

Of note is that the Chaplain Services division of all three organizations wear white, a color near-universally
associated with spirituality and purity.
_____ 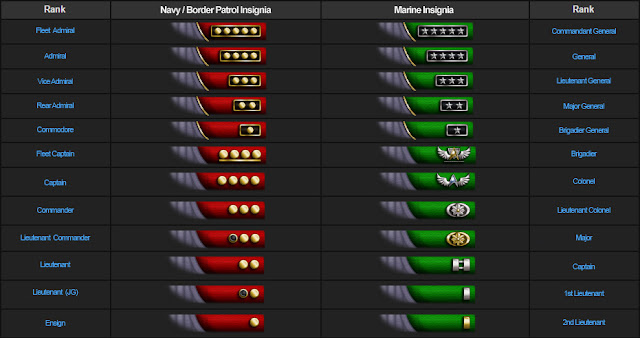 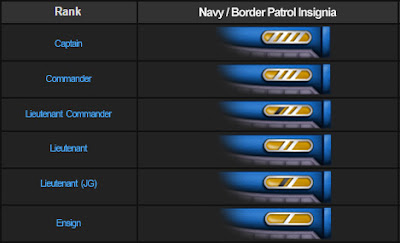 Due to the Border Patrol Service having begun as a sub-division of Starfleet, the service retained the
naval rank structure when they were incorporated as a separate organization in 2215. As such, they
continue to use the same rank insignia as well. The Marines have used the same rank structure since
their pre-MACO days.
_____

The rank insignias used here were created by Kuro-chan of Kuro-RPG.